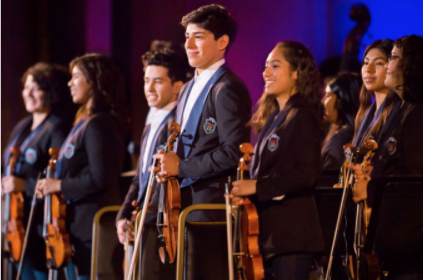 Readers of Shakespeare’s tragedy Julius Caesar will recall the famous and foreboding warning: Beware the ides of March. Some 500 years later, as the COVID-19 virus spread across the world and across the country, another serious warning blazed across media in mid-March. California Gov. Gavin Newsom issued a statewide shelter-in-place directive that would close schools, shops, and businesses across the State.

As scientists and public health officials learned more about the virus, social distancing policy became an important preventive measure. That also meant that performances in theaters and concert halls would be suspended. Weeks later, the LA Phil announced that all programs in the Walt Disney Concert Hall and at the Hollywood Bowl were cancelled through the end of the 2019-20 season (See story on p. 2 for more closure info).

Affiliates in the Desert is the newest of 17 Los Angeles Philharmonic Affiliate Committees (LAPAD) dating back to 1923. When LAPAD was organized in 2019, the founding board determined that the mission of LAPAD would be to support LA Phil educational programs and outreach, and to promote youth music education in the Coachella Valley and neighboring areas. LAPAD had its official launch on March 2, 2020, which included as a highlight a special recital by Marion Arthur Kuszyk, LA Phil Assistant Principal Oboe. Due to the quarantine that was imposed a short while later, the LAPAD inaugural event would be the last time members and friends could gather for in-person events for the foreseeable future.

Technology came to the rescue. On May 22, 2020, LA Phil executive team member Elsje Kibler-Vermaas, Vice President-Learning, accepted our invitation to join us via Zoom for a virtual meeting event. This gave the LAPAD board and members an opportunity to meet and get acquainted with the person who heads the sector of the organization LAPAD supports.

Vice President Kibler-Vermaas began by thanking LAPAD for arranging the virtual event and for supporting her broad educational programs and institutions. She is very warm and cordial and said, “Call me Elsje.” She also explained this is the second time she worked at LA Phil, but both engagements were and are in education. In 2006, she joined LA Phil as Manager of Education for three years; after a stint at the Concertgebouw in Amsterdam and later with the Hartford Symphony, Elsje returned to the LA Phil in 2017 as Associate Director, Collaborative Learning. She was named Vice President of Learning in 2018.

Today Elsje presides over an education program with vast and numerous tentacles throughout the greater Los Angeles metropolitan area reaching over 100,000 schoolchildren, families, young musicians, and concertgoers through concerts, participatory music programs in schools, workshops, and events at the Walt Disney Concert Hall and the Hollywood Bowl, including Toyota Symphonies for Youth and Youth Orchestra Los Angeles (YOLA).

Elsje reported that closure of Walt Disney Concert Hall and the Hollywood Bowl had a major impact on the LA Phil. The $80 million loss of income from the cancelled events required substantial cuts to the LA Phil budget, including the painful decision to furlough some staff and withdraw some endowment funds to sustain key operational components of the organization in these unprecedented times.

When asked what percentage of her education budget was scaled back, Elsje explained that every department in the organization needed to make sacrifices. “However,” she said, “the Executive Team, together with Music & Artistic Director Gustavo Dudamel, determined that we needed to do all we can to remain true to our core principles and mission.”

During Elsje’s presentation we gained interesting insight, particularly about the acclaimed YOLA program.
Currently, there are four YOLA sites; the fifth will be at the Frank Gehry-designed Judith & Thomas L. Beckmen YOLA Center at Inglewood. “Students who are enrolled in the YOLA program are making a major commitment,” Elsje said. “They spend 12 to 18 hours per week on music; and it’s a 10-year program. Most of the YOLA students go on to college and 29 percent of them major in music,” she added. “Looking ahead and beyond this difficult time, I’m confident the YOLA program and our students will thrive.” Wrapping up the hour-long Zoom conference, LAPAD President Michael Napoli thanked Elsje for taking time to meet with us and to provide us with a deeper understanding of what the LA Phil is dealing with during the COVID-19 pandemic and all the unexpected changes required as a result. Speaking for all LAPAD members and friends, Mike assured Elsje of our continuing commitment and support.

Affiliates In the Desert 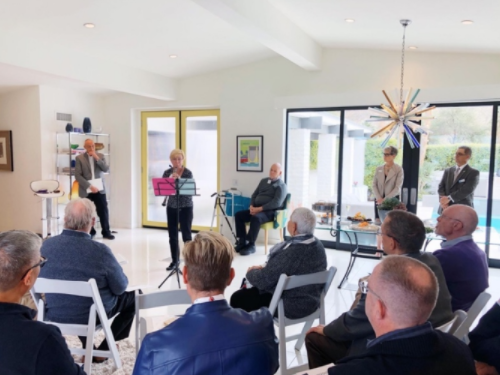 Affiliates in the Desert is a volunteer committee of the Los Angeles Philharmonic Association, a 501(c)(3) tax-exempt organization.